Arrive in Ushuaia anytime today. Enjoy a complimentary stay at the beautiful Arakur Hotel & Resort*. Explore the trails, take a spa, head into town, or relax and soak in the surroundings. Our optional evening briefing is a great opportunity for you to ask questions and to meet some of your fellow travelers. Enjoy a complimentary buffet breakfast in the morning.

Morning free to explore until our mid-afternoon transfer to the ship, where you will be greeted by our Expedition Team and ship's officers at a safety and orientation briefing followed by theCaptain's welcome dinner. After dinner, relax and take in the mountainous scenery on our early evening sail down the Beagle Channel past Magellanic penguin, Rock Cormorant, and Sea Lion colonies.

Days 3-4: At sea towards Antarctica

Among the wildlife spotting opportunities as we sail south are the Albatrosses, Prions, and Petrels that frequently follow the ship. Our Expedition Team will be out on deck as well, looking for the whales and dolphins that may also be seen in the area. Our experts will begin the presentation series with informative and entertaining presentations on the wildlife, history, and geology of Antarctica. Helpful briefings on environmental regulations and expedition safety will also be held in the comfortable presentation hall. The length of our journey depends on sea conditions,but we hope to have our first sightings of the South Shetland Islands of the Antarctic Peninsula in the evening of Day 4.

Our Expedition Leader and Captain will create a flexible itinerary based on weather, ice, and opportunity. The route will stress the most scenic bays and channels of the Peninsula with stops at penguin rookeries, seal wallows, bird colonies and whale feeding areas as well as sites of historic and scientific interest. The trip may include picturesque Neko Harbor, sheltered Paradise Harbor, the Humpback Whale favored Wilhelmina Bay, the wildlife-filled Errera Channel, the majestic Neumayer Channel, or the striking Antarctic Sound with its tabular icebergs.

We may stop at an active scientific base such as Poland's Arctowksi or Argentina's Esperanza as well as a historic base such as UK's Port Lockroy or the Nordenskjold expedition remains at Hope Bay. Adelie, Chinstrap and Gentoo Penguins abound, and Weddell, Crabeater and Elephant Seals are often found hauled out to rest along with predatory Leopard Seals and the irritable Antarctic Fur Seal. Minke and Humpback Whales are frequent visitors in the late season and Orca sightings are also common.

Early on the morning of Day 8 we will pass by Elephant Island, and if conditions allow, we will zodiac cruise or land on this exposed and remote local. Our focus will be Point Wild where Shackleton's party beached, after Endurance sank in the Weddell Sea. Twenty-two men remained here, living under a lifeboat, while Shackleton and two companions took the James Caird and sailed for South Georgia.

Days 9-10, At sea towards South Georgia

These days at sea will mirror that path Shackleton's recuse party took from Elephant Island to South Georgia and eventual rescue. We continue our education program and learn about the amazing natural and human history of South Georgia Island. The sea journey transits the rich waters of the Scotia Sea, where we will spend time on deck with the albatross and petrels as well as keep a look out for feeding whales from the bridge. In the evenings we will showcase the James Caird reenactment documentary "Shackleton: Death or Glory" hosted by Shackleton Epic crew member and our historian Seb Couthard.

This morning we'll discover Gold Harbor,one of the most stunning sites in all of South Georgia. At the head of the bay is the spectacular Bertrab Glacier, which hangs over vertical cliffs. Gold Harbor is home to both Gentoo and King Penguin colonies. The adolescent fur seals of the season dominate the beaches while Southern Giant Petrels constantly patrol the site for feeding opportunities. In the afternoon we'll visit Cooper Bay, home to the only Macaroni Penguin colony that is reasonably accessible by boat; We'll either land on a small beach or cruise in zodiacs to catch a glimpse of this notoriously difficult to view penguin species. If landing is possible access to the Macaroni colony does involve climbing up a steep, tussock covered slope, littered with Fur Seals. Chinstrap Penguins are also prevalent at this site.

After breakfast, we will explore St.Andrew's Bay on South Georgia's exposed and rugged north coast. If conditions permit we will land and visit the island's largest King Penguin colony. In addition to King Penguins, St. Andrew's Bay is also home to over 6,000 Southern Elephant seal cows during the pupping season, making it one of the largest Elephant seal breeding beaches on the island. Late in the season molting Elephant seals are common along with fur seals. In the afternoon we will arrive at Grytviken, and visit the final resting place of Ernest Shackleton, in the company of special guest, Angie Butler. While researching her recent book on Shackleton's "right-hand man" Frank Wild, Angie discovered Wild's misplace dashes, and worked with Wild's family to have them brought to Grytviken, where they now rest on the right hand side of Shackleton's gravesite.

Grytviken means 'pot cove' in Norwegian and Swedish, and the site earned its name from the numerous sealers' try-pots (used for rendering seal or whale blubber) that have been found here. The ruins of Grytviken whaling station are at the head of the cove, surrounded by spectacular mountains. After visiting the cemetery and raising a glass to "The Boss" we'll have ample opportunity to explore the remains of the whaling station, as well as a museum that contains whaling photographs and artifacts. A post office, and a full size replica of the James Caird are located in a building adjacent to the museum. The Norwegian Church built in 1913 is only a short walk away.

This morning we'll explore Fortuna Bay. In addition to a good sized King Penguin colony, the bay is also home to Light Mantle Sooty albatross, and fur and elephant seals. Fortuna Bay was once highly utilized by sealers and the caves they used for shelter are visible from the landing beach.If conditions permit we will return to Fortuna after lunch for the "ShackletonWalk", recreating the final leg of Shackleton's historic journey by walking from Fortuna Bay to Stromness Bay. This is a moderately difficult walk, and those who prefer to stay onboard for the quick repositioning to Stromness, will find plenty to enjoy in its scenic beauty, historic buildings, and abundant wildlife. Those who choose not to do the walk may appreciate a stroll to the beautiful Shackleton Waterfall located at the end of the valley.

This morning we will visit the Salisbury Plain King Penguin colony. The colony boasts an estimated 60,000 breeding pairs, which swells to 250,000 individuals in total during molting season. The colony has had an extraordinary population increase over the last century; only 350 breeding pairs were counted at this site in 1912.

While we're lunching the ship will reposition to Prion Island, an important breeding site for the Wandering Albatross and the South Georgia Pipit. This landing requires a special permit, and is highly regulated, but is one of the few places in the world where we can view Wandering Albatross on their nests.

We plan to awake this morning in King Haakon Bay, the historic launching point of Shackleton's treacherous traverse, of what was then an uncharted mountainous island. If weather and swell permit our landing in this exposed bay, we'll disembark for a leisurely walk along the bay or explore the area via zodiac. We may see elephant seals, fur seals and king penguins on the beach as well as burrowing petrels and pipits in the tussock grasslands. As we leave the island we'll enter waters rich in krill, so we'll spend some time on deck, keeping an eye out for several species of whale that may be feeding here as the cold currents sweep past South Georgia's northernmost tip.

Days16-17: At sea towards Falklands

We now make our way west towards the Falkland Islands and the warmer waters north of the Antarctic convergence. The rich waters created by the Pacific rounding South America into the southAtlantic Ocean allows us the opportunity to watch out for different species of sea birds. New species of whales are possible including Southern Right whales and a few species of dolphin not found in Antarctic waters. We will conclude the documentary series "Shackleton: Death or Glory" hosted by expedition bosun petty officer and our historian Seb Couthard.

Chosen for its sheltered harbor and access to abundant fresh water and peat for fuel, Stanley is easy to discover on foot as most shops and services are centered on the port. The museum, the post office featuring first day covers, plenty of shops with locally made wool items and Stanley's lively pubs will all be available. It is possible to experience the wildlife of the Falklands from the town including Sea Lions and Peale's and Commerson's Dolphins in the harbor.

Day 19: At sea towards Ushuaia

Our final day at sea as we transit towards the Beagle Channel and South America. This final day of the trip we spend with celebrations of our voyage with presentations from our expedition team, and the voyage slideshow from our photographer. The evening is capped with our Captain's farewell cocktail and dinner reception, with live music and shared stories in the bar.

Morning disembarkation allows you to catch a flight homeward or extend your stay in Ushuaia, for more sights and adventure.

One of the things which makes this voyage special is that you will be accompanied by special guest lecturers who through their own incredible polar experiences will bring to life the epic saga of 1914.

Seb Coulthard, who re-enacted Shackleton's rescue mission onboard the James Caird rowboat from Elephant island to South Georgia, and Sunniva Sorby who was a member of the first women's expedition to reach the South Pole un-aided.

Seb and Sunniva will be giving lectures about their adventures as well as being available for chats or questions through out the voyage. Swoop recently interviewed Seb and wrote a blog about it here. 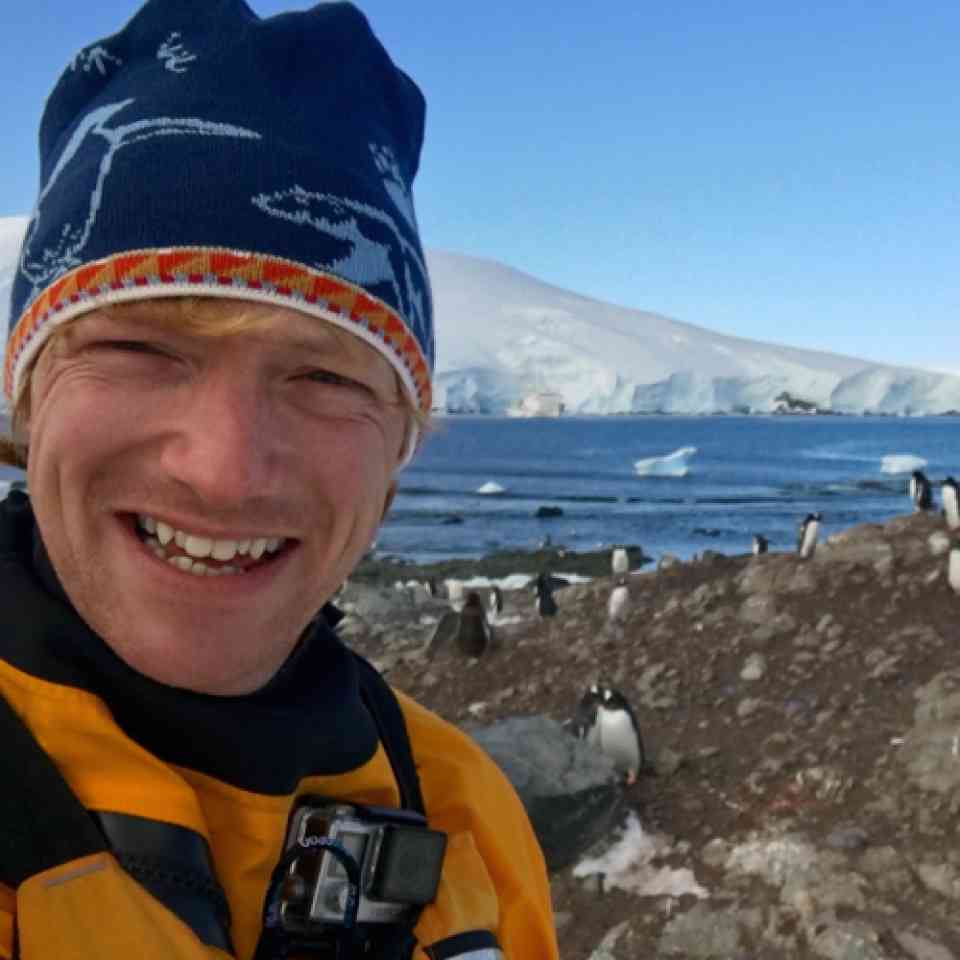 It's rare to find a ship combining such comfort with a really strong expedition team - worth every penny.

This trip can run as a group trip, with prices starting from $13,995 per person for a complete group. If you are looking to join a group or you are a solo traveller we will help to form likeminded groups of travellers. Please let us know your travel plans.

For those travelling solo who would like their own cabin, this ship has a good number of dedicated single cabins, please contact us for details.

Children aged 12 years old or over are welcome. There isn't any concession on pricing.