I remember booking my first trip to Antarctica and thinking ‘gosh, there are so many ship choices’. For those just starting to plan an Antarctic adventure, the options can seem a little overwhelming. Before you invest time in considering the many options out there, does it make a real difference what size your ship is?

Having been aboard almost every single Polar expedition vessel in operation, I’m aware of the pros and cons of smaller and larger ships and how they can affect your Antarctic experience. Though it’s ultimately down to personal choice, here are a few things to consider.

How many people can land at once on an Antarctic landing site?

IAATO – The International Association of Antarctic Tour Operators – states that only 100 people are allowed on land at any one time from a single vessel. If you travel on a ship with less than 100 people, it’s a zero-compromise experience because everyone onboard can go ashore together.

If you travel on a vessel that carries 200 people, then only 100 of those guests will be allowed onshore during one landing. The other 100 will layer up and head out on a zodiac cruise before swapping with those on land.

In my experience, it’s not always clear cut whether you want to be on land or in a zodiac. It really depends on what’s going on around you in terms of wildlife. If there are breaching humpbacks out at sea, then everyone on land will want to be in the zodiacs. Alternatively, if there are curious penguins and seals hauled out on the beach, then the people in the zodiacs will want to trade places as quickly as possible.

Nowadays, many popular vessels such as the MS Expedition, Greg Mortimer and the Sylvia Earle all take around 130 passengers. So, what does this mean in terms of landings? Normally, in this case, the extra 25-30 passengers will have signed up to the kayaking program and will usually head out to explore the coastline and smaller coves, leaving the remaining 100 passengers to go ashore unhindered.

It’s also worth keeping in mind that not everyone on board will want to go ashore. As crazy as it may sound, I often see people choosing to stay aboard some days, perhaps seeking some solitude whilst everyone is off adventuring.

This means that ships that sail with roughly 130 passengers are generally considered to be zero-compromise voyages, much like those with 100.

How much time can you spend at an Antarctic landing site?

It may seem strange to think in such a remote environment, but each ship is given an allocated time and space to weigh anchor in each particular landing site (weather permitting of course). Usually, the captain is given about 5 or 6 hours in each location, weather permitting of course, which means that several landing sites can be visited each day.

Strict regulations dictate that you cannot stay any longer than the allotted time so as to avoid any crossover with other vessels in the region. A rule that exists for good reason, to avoid one ship hogging all the glory moments. So, even if you’re witnessing a whale frenzy sorry that’s it, you have to move on.

So, what happens in these 5-6 hours? Firstly, the captain needs to find an appropriate place to weigh the anchor. The expedition leader then assesses the area for the best landing sites and potential hazards. The expedition team will have a full briefing before another briefing is given to the guests. Zodiacs and kayaks are then prepared and lowered into the water, whilst an expedition team goes ashore to prepare the landing site. All guests then prepare for landing and begin making their way to the mud-rooms to change and board the zodiacs.

All this takes time, not to mention the fact that everything has to be done in reverse before leaving the site. 4 to 5 hours may seem like a long time, but when you consider everything that’s involved, those hours go quickly. To put it simply, more passengers means more preparation time, and the added logistics that come with larger ships results in less time out and about enjoying the good stuff. In my experience, you’ll get about 30 minutes less time per landing which can add up quickly over an entire voyage.

The newer 200 passenger vessels tend to have more than one zodiac embarkation zone, normally one on either side of the ship. This allows the expedition team to get twice the amount of people on zodiacs at the same time it would take a smaller ship to load 100 passengers. That said, the last time I sailed on a larger vessel I noticed that the expedition team rarely used both boarding zones at once. This was probably for safety reasons as monitoring two zodiacs simultaneously is more difficult. Also, one side of the ship is usually calmer, depending on the direction of the sea swell.

On the occasional times that both zodiac platforms were being used simultaneously, it still wasn’t a seamless process as very rarely did two zodiacs arrive or depart at the same moment. However, it is certainly quicker than the older 200 passenger ships in which only one zodiac platform is available, creating longer wait times for those on board.

Boarding a zodiac on an Antarctic expedition cruise

On the larger vessels, you’ll be split into 4 or 5 groups at the start of your voyage. For example, I was in the ‘Leopard Seal’ group on my last trip. This meant that at each landing I would wait for the Leopard Seal group to be called and then head down to the mud-room to begin boarding the zodiacs.

Separating guests into groups is a sensible way of reducing wait times when boarding, but it can cause some frustration. There is usually an hour gap at least between the first group being called and the last group being called. The groups are of course rotated each day, but I couldn’t still help feeling agitated and jealous when earlier groups would be out experiencing Antarctica ahead of me.

On one sunny day, I was standing on deck and watching the already-departed groups get up close and personal to several humpbacks about 500 meters from the ship. I was itching to get out, but we were the last group to be called. By the time we got to the spot, the whales had moved on.

On most smaller vessels, there are no groups. Everyone makes their way down to the embarkation point and lines up, and it normally takes around 20 minutes to get everyone off safely and securely. This means no one misses out, gets a slightly shorter experience or has to sit around for an hour waiting to be called.

Although not a common issue, sometimes the captain will not be able to weigh anchor particularly close to the shore meaning that the zodiacs will take at least 10-15 minutes to reach the shore. This is then compounded when you have 200 passengers that you’re shuffling back and forth.

Something else to be aware of is that when cetaceans are spotted 20 or 30 minutes away from the ship. By the time you get there, you’ll only have 30 minutes or so to watch them before you have to head back to the ship to rotate into the next group. It’s not hugely common, but I’ve experienced it twice and it is frustrating.

Although it may not seem as important, the itinerary also plays a major factor in what ship you choose. Excluding those points raised above, larger ships are generally suitable for itineraries that only visit Antarctica. This is not the case when it comes to itineraries that visit the remote sub-Antarctic island of South Georgia.

In Antarctica, there is wildlife action to be had both in the open water and on land. Not so true in South Georgia. Unlike Antarctica, where you’re likely to see whales, orca and leopard seals from your zodiac, South Georgia’s teeming wildlife is found almost solely in a handful of densely packed spots – the beaches. Penguin colonies 300,000 strong can be found at both Salisbury Plain and St Andrew’s Bay, two of South Georgia’s best-known landing sites.

Due to the sheer number of penguins along these beaches, the expedition team has to land the zodiacs quite far from the major colonies which means up to a mile hike along the beach. The key factor here is that you want as much time as possible to take it all in, the colonies in all their raucous glory, the smell of that fresh penguin guano, the endless beckoning photo opportunities. No matter how long you’re there, I can promise you that you’ll want longer. Smaller ships give you much more time on land, and I’d go as far as saying that I wouldn’t consider a larger vessel if you’re visiting South Georgia. If you’re voyaging to the end of the Earth, you want time to properly enjoy it.

This is where larger ships tend to pull ahead. By carrying more people, the price per passenger is generally lower than that of a 100 passenger ship. It is not as much as you might think, however,  and I always ask myself if more facilities onboard larger vessels create a better experience overall? My answer, for those wondering, is always a resounding no.

Due to their larger size, 200 passenger ships almost tend to have more facilities. Pools, spas, massage rooms and large gyms are common on the bigger ships and rare on smaller vessels.

Is it worth it? That’s down to personal choice, but I encourage you to ask yourself; do you want an Antarctic experience, or do you want to take your current experience to Antarctica? Smaller vessels have much more of an expeditionary feel to them, which I find completely charming but if you wouldn’t be without your luxuries, then you may want to consider a bigger vessel.

It’s also worth noting that on larger ships you’ll generally feel less motion. This is not especially important in Antarctica as most locations are sheltered, but it will make a difference on the Drake Passage crossing.

There is no question in my mind that sailing on a small vessel is the right option for me. Most people who visit Antarctica or the Arctic do so for the wildlife watching opportunities and smaller vessels give you this in abundance. This is not to say that larger vessels do not have their place though. Plenty of people I know prefer them for their enhanced facilities and ability to withstand rougher seas. It all comes back to the personal and for me, Polar travel has never been about facilities. It’s about exploration, embracing the spirit of unbridled adventure where surprises wait at every turn and witnessing incredible wildlife at the very edges of the habitable world. 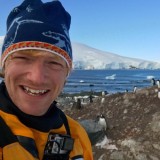 John first set foot from the UK, aged 20, on a flight to South Africa. He quickly realised he wanted to visit every country in the world. He found his way to Finland, where he became a fisherman and spent 13 years living under the northern lights, just south of the Arctic Circle. After leaving Finland, John forged a career in travel, before returning to his much-loved snowy roots and speciality: the polar regions.

See all posts by John →