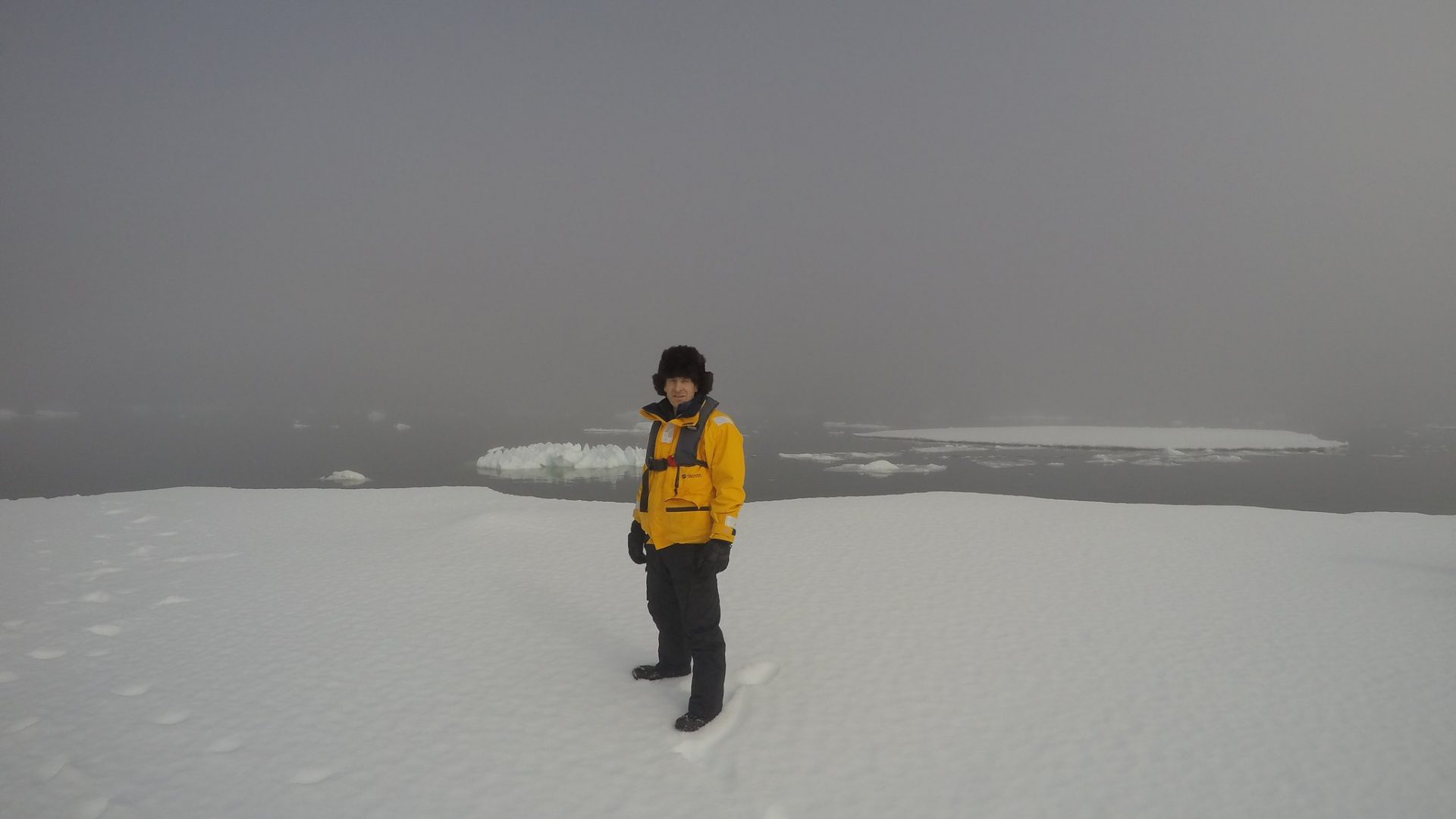 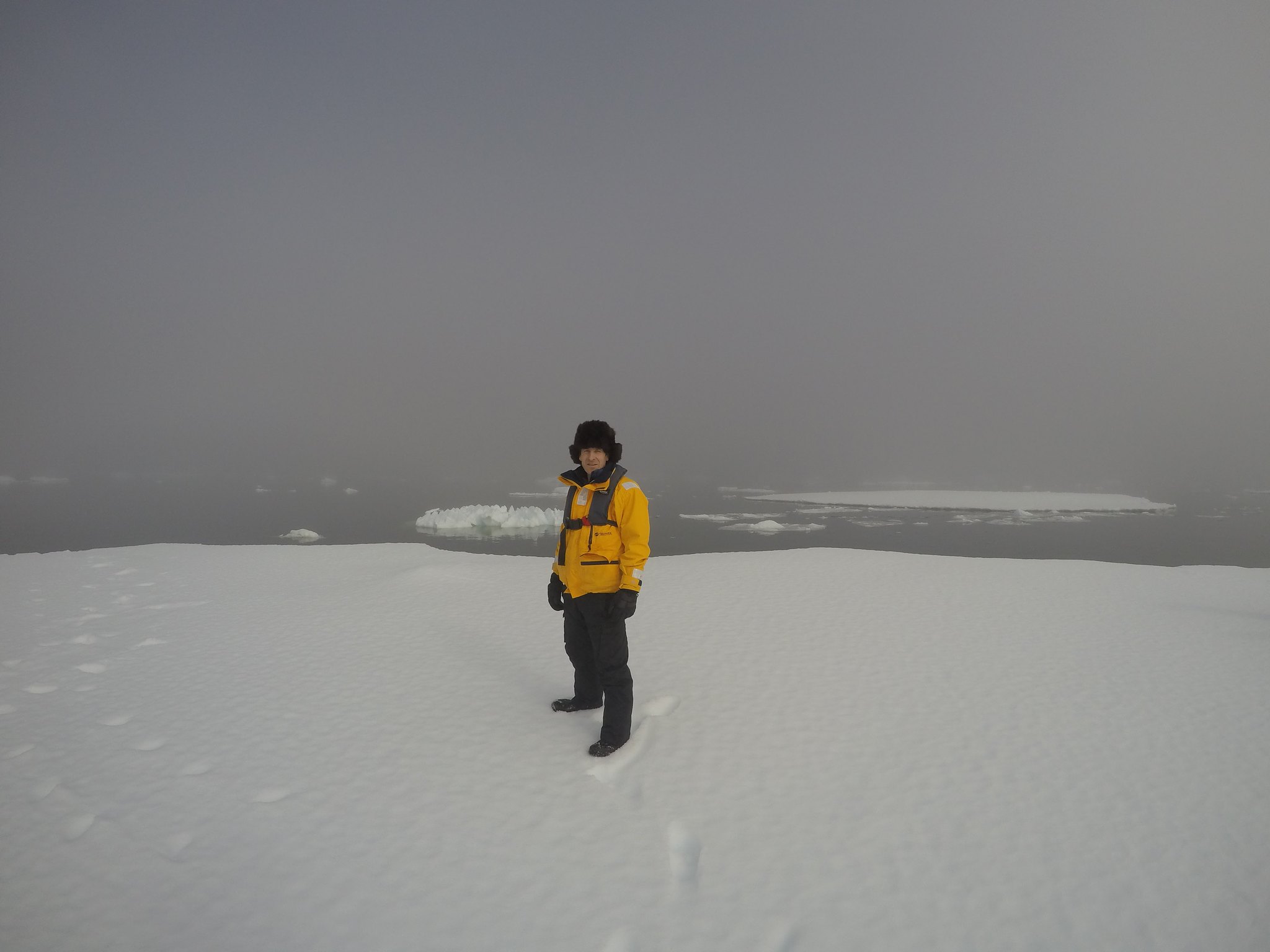 Antarctica is so magical that it always feels very special and a great privilege to be there. Two main things struck me this time: firstly just how different the same places can look under differing light conditions and at different times of the season. Secondly, the sheer remoteness and ‘otherworldliness’ of the place is staggering. There’s nowhere comparable on the planet.

What were your highlights?

On day 1 at Orne Harbour we were amongst a pod of feeding humpback whales​ within five minutes; that set the bar pretty high for the rest of our trip. The evening of day 2 saw us bisect the Polar Circle at 66 degrees south 33 – an important achievement for many on board and no small testament to the captain’s skill. Kayaking through Pleneau Bay’s iceberg graveyard on a millpond sea with icebergs of every shape was a definite highlight, as was mooring our zodiac (a small rubber motorised craft) to a passing iceberg and getting out to have a snowball fight! 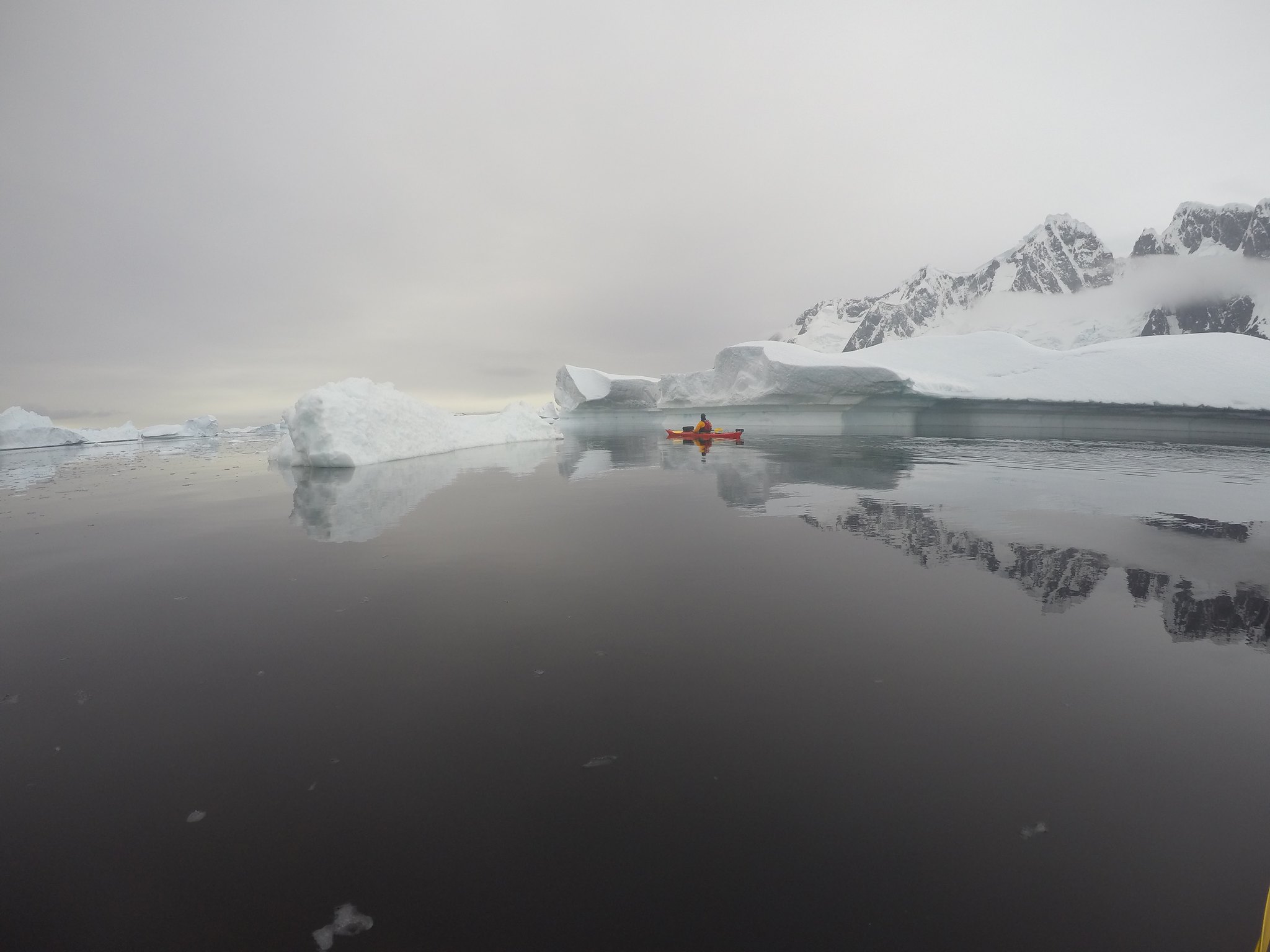 Did you encounter much wildlife?

February is one of the best months to be in Antarctica for wildlife, and it certainly didn’t disappoint. Every single day held incredible wildlife experiences for us. The zodiac cruise at Baily Head, with its 500,000 chinstrap penguins and boisterous fur seal colony, felt like the ‘Serengeti of the South’ for the sheer density of wildlife, while the hilarious antics of the gentoo penguin chicks at Cuverville Island were priceless. We also did well for whale sightings, the most amazing moment being kayaking with a slumbering 40 tonne humpback whale who was snoozing on the surface and emitting a shrimp-infused fine mist with his exhalations – an extraordinary chance encounter which many of the expeditionary staff hadn’t witnessed before. 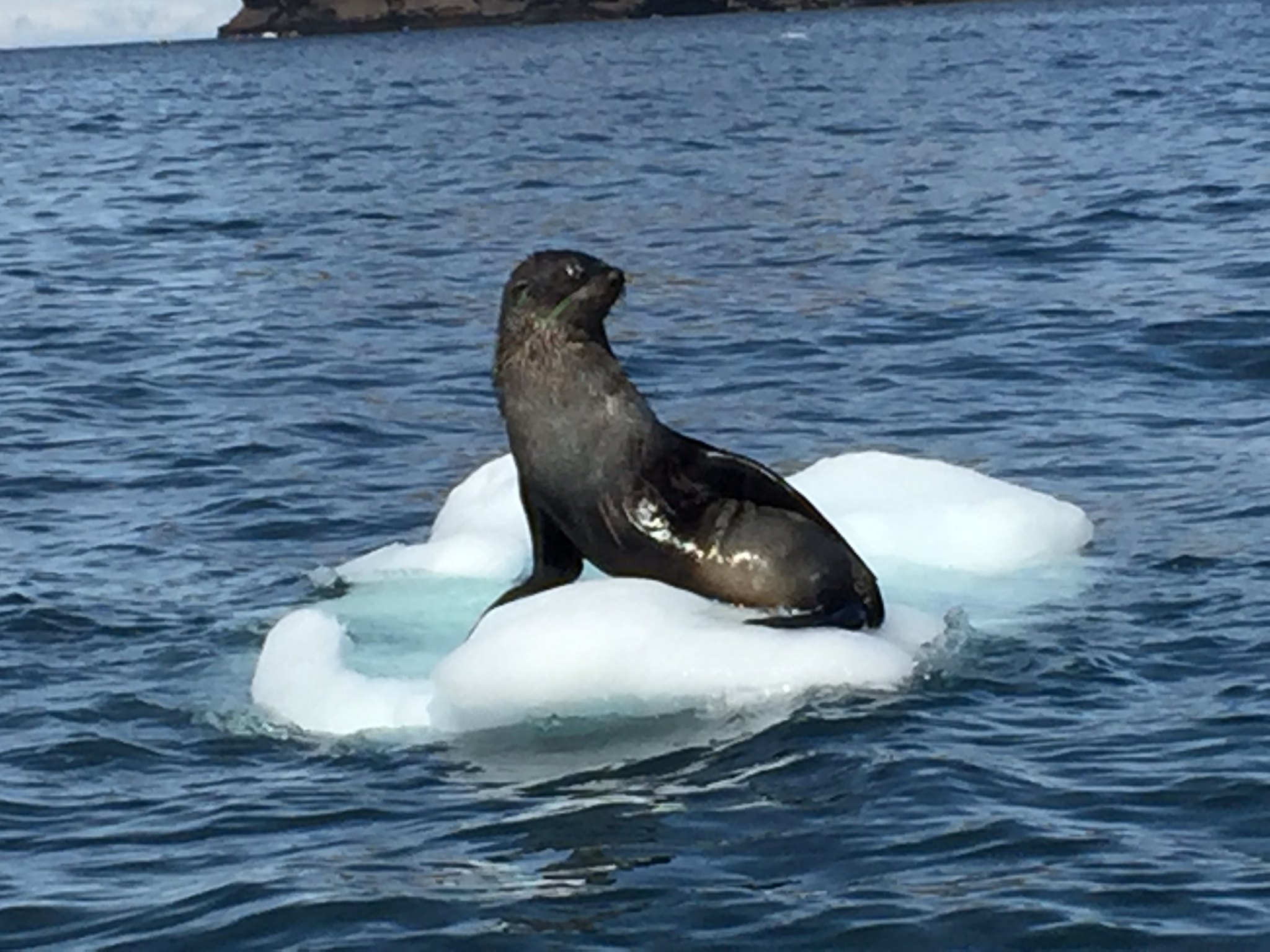 The most dramatic event we witnessed was on the morning of day four. Re-crossing the Bransfield Strait we had a cocktail of sea-life around the boat: a large pod of orca (killer whales), fur seals, a few humpback whales and an albatross. This idyllic scene rapidly disintegrated when the orcas instigated a seal hunt and all eyes on board were strained as a high stakes game played out right in front of us. Small detachments of orcas harried the panicking fur seals, who in open water with no chance of cover knew they were in serious trouble. We felt like accidental guests to a nature documentary. Not 60 yards from the ship, in the clear morning light, three orca surfaced in parallel. One tossed a seal pup in the air, playing with it like a cat would a mouse: a stark reminder of how harsh life down there can be.

How was the weather?

Overall we had very good weather, with sunburn being a far more realistic danger than frostbite! This made getting the layering of our clothing right very important, but also made it much easier for handling cameras as gloves could often be dispensed with. Pushing through thick ice and heavy fog on the morning of day 2 was a reminder of just how quickly the weather can change in these southerly latitudes. 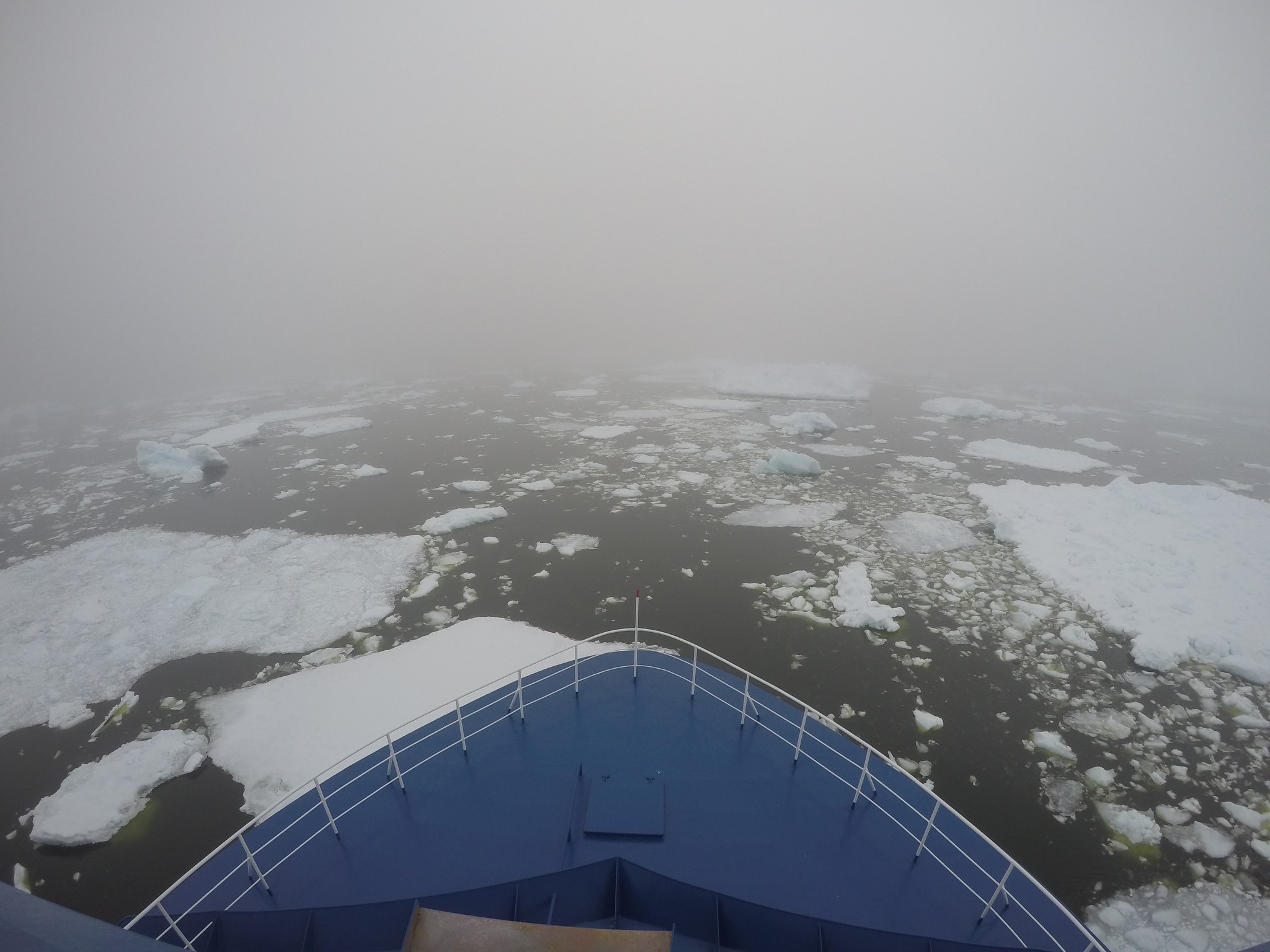 What was it like to fly instead of sail?

Having previously always sailed to Antarctica, I was keen to experience the flight over the Drake Passage, It’s certainly a novel, expedient and practical way to get to Antarctica; I enjoyed the time saved and also avoided any anxieties about rough seas. The trade-off was losing that sense of ‘journey’ which you get on a boat, and it being part of the overall adventure. Finding myself in downtown Punta Arenas only two and a half hours after being plucked out of Antarctica was also quite a profound reverse culture shock!

How did you find kayaking in Antarctica?

It’s right up there with swimming with whale sharks and dog sledding in the Arctic. Being part of a small group, travelling at a much slower pace, observing wildlife at close quarters and enjoying the silence of Antarctica all helped make the kayaking excursions a real highlight; it was both exciting and therapeutic. 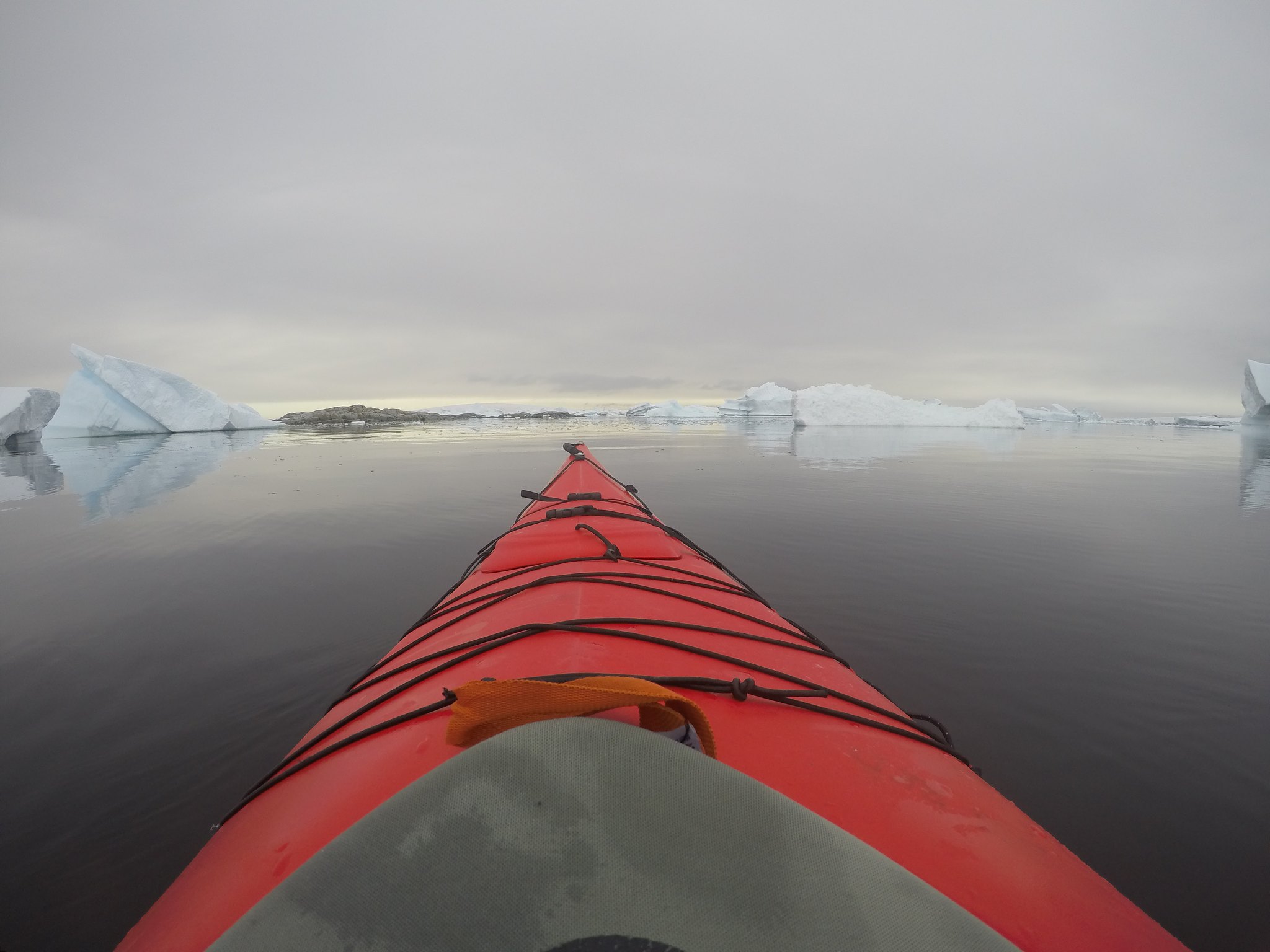 The chosen kayaking sites were all sheltered, presenting no real technical challenges and mastering the pulling on and off of my dry suit was less tricky than I had envisaged. For anyone with an adventurous spirit, keen to maximise their Antarctica experience, I would strongly recommend the kayak trips.

You sailed on the Ocean Nova, how did you find her?

Outstanding. She’s the perfect expeditionary ship – small, manoeuvrable and sturdy, but at the same time very comfortable. There was an outstanding staff on board who couldn’t have done more to make sure everyone’s time was enjoyable as possible. The ship’s glassed-in panorama lounge was a favourite spot with everyone – you can enjoy the extensive 200 degree views while staying warm and close to the top notch coffee machine, never missing any of the action. 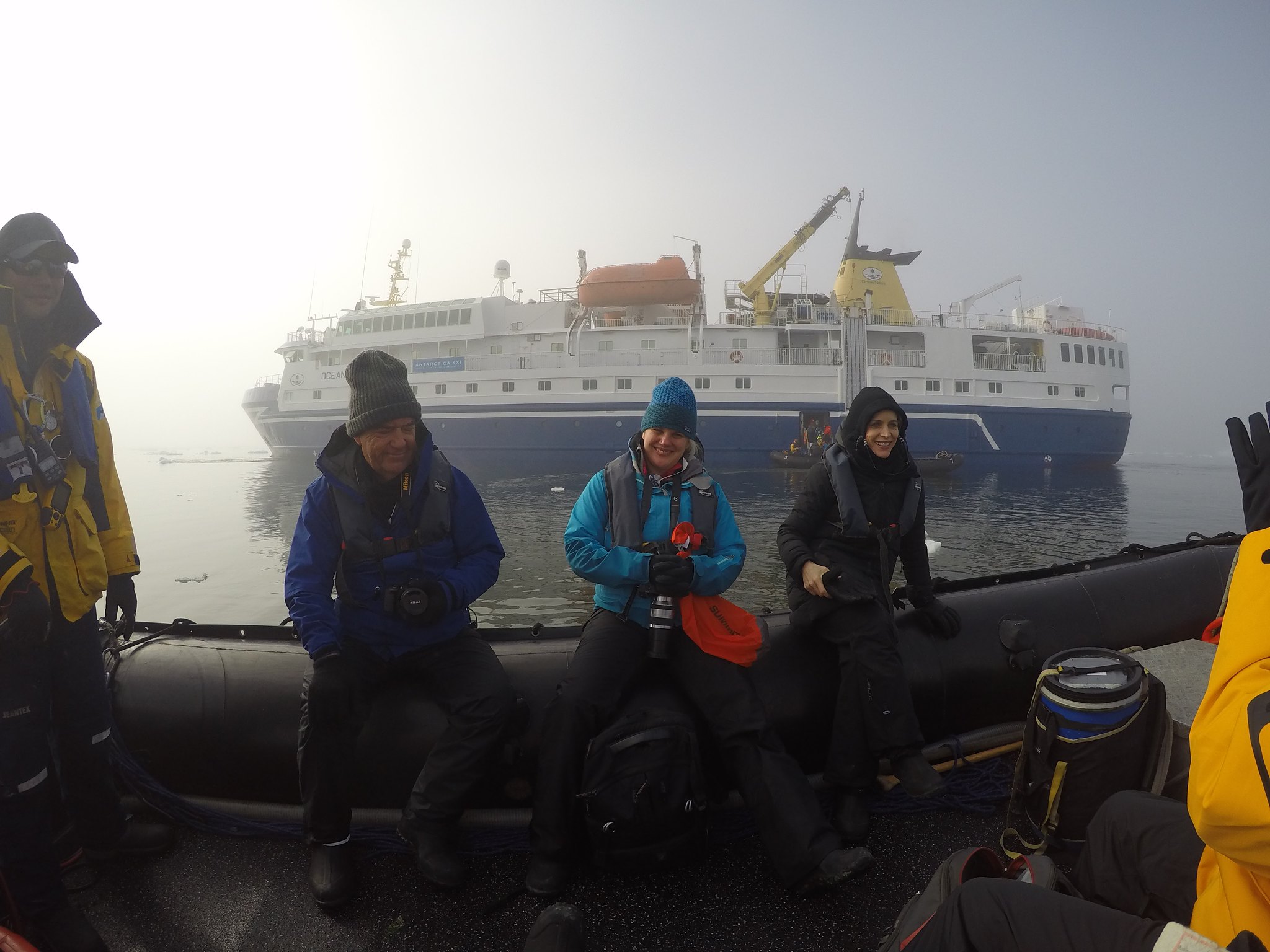 What advice do you have for first (and second time) visitors to The White Continent?

For the first time visitor, over and above any practical tips we give them, I would urge them to remember to put their camera down. Antarctica is incredibly photogenic – from the wildlife to the mesmerising ice; it’s very easy to get carried away in trying to capture it all, to the detriment of actually sitting quietly from time to time and absorbing the surroundings with your own eyes. 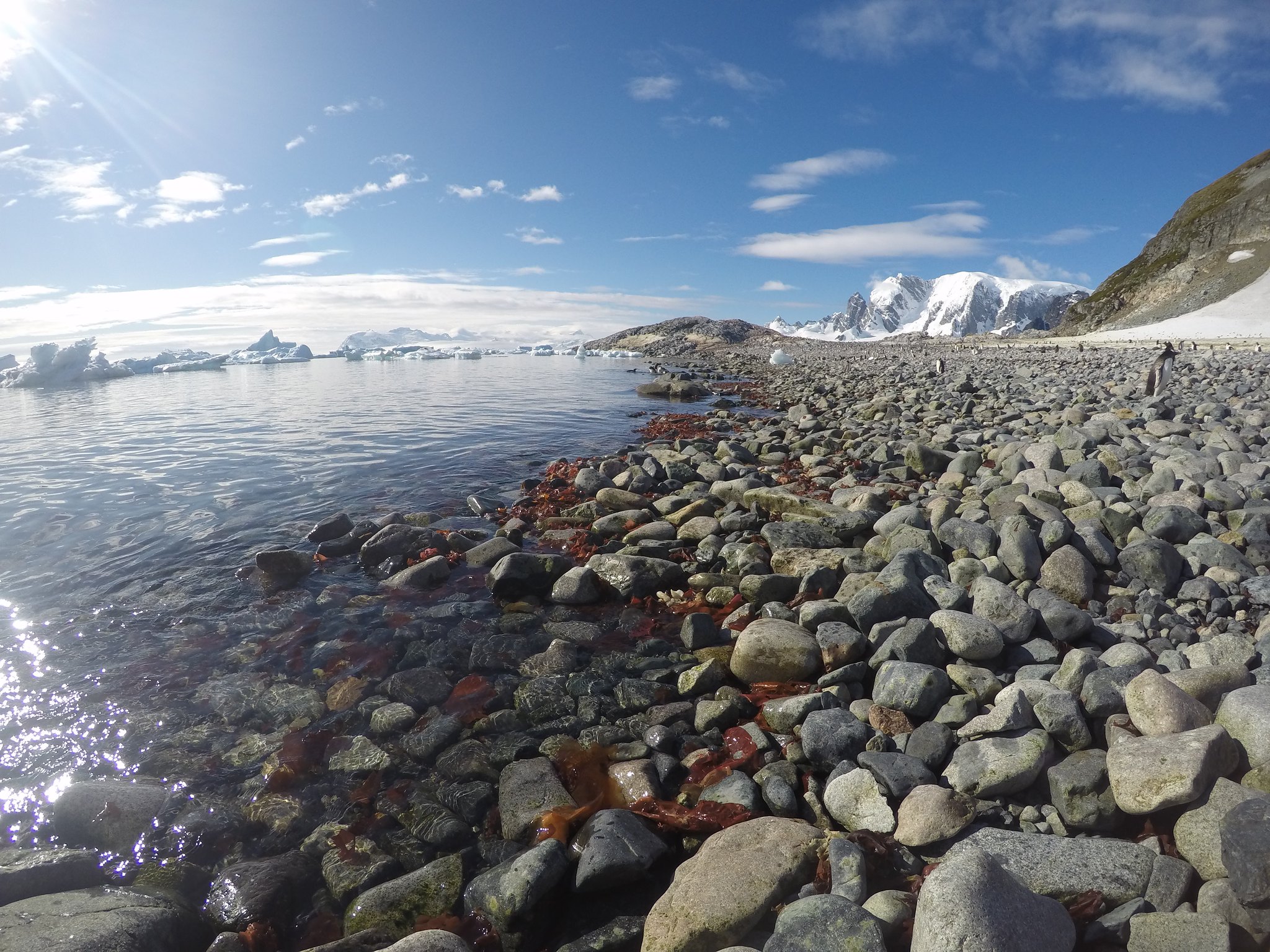 I would encourage those returning to Antarctica to choose a different itinerary to their first trip south, and a different time during the season. You will really appreciate the change in conditions and the seasonal nuances. Before I first visited Antarctica I didn’t understand why somebody would want to go more than once. Now I look forward to many more visits.

Alex travelled to Antarctica in February of 2016 on the Ocean Nova. For more about his adventure, take a peek at his incredible photo album.  To book your own expedition to The White Continent, get in touch with Alex or John.

One of the most common pre-voyage questions I get asked is: “What’s the Drake Passage like?” Returning clients rarely mention the Drake, especially if they enjoyed two easy crossings (one there and one back). With an estimated one in three…
END_OF_DOCUMENT_TOKEN_TO_BE_REPLACED

Why not all expedition teams are the same

I have now sailed into Wilhelmina Bay on two separate voyages, and kayaked there once. Along with Cuverville Island, it’s my favourite place on the Antarctic peninsular. If the sun is shining, Wilhelmina, literally sparkles, huge mountains rise from a…
END_OF_DOCUMENT_TOKEN_TO_BE_REPLACED

“No matter how well travelled anyone was, we all had the same sense of childlike wonder in Antarctica. It exceeded all expectations: the scale, serenity and beauty of the continent makes an indelible mark on the soul.” Swoop Antarctica customer…
END_OF_DOCUMENT_TOKEN_TO_BE_REPLACED

How to do a polar plunge

Polar plunges are quite literally the coolest thing you can do in Antarctica. On my last voyage 48 out of 92 people jumped into the icy water; that’s quite a lot. I’m going to take some credit for that enthusiasm.…
END_OF_DOCUMENT_TOKEN_TO_BE_REPLACED

Which apps for Antarctica?

John, one of Swoop’s polar specialists, shares his top tips for getting the most out of your apps when in Antarctica: There is no denying the usefulness of apps on our smart devices. Whilst I’m sure we would all agree…
END_OF_DOCUMENT_TOKEN_TO_BE_REPLACED